I finally got some time to work on the bike instead of the movie!

I’ve had the pipes in the basement with the intention to cut off the rusted- out mufflers for months. Last weekend I had a couple of hours to kill and I decided to head downstairs and take a crack at them. 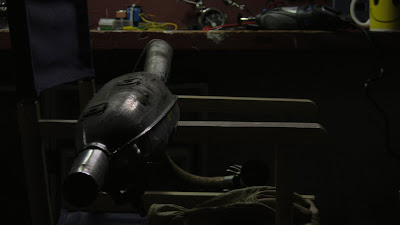 Probably the most distinctive feature of the CL350 (as opposed to the CB350) is the mufflers. Unfortunately they are also one of the most troublesome. Due to their shape and position, they collect water on the inside which is never good for steel, and most any un-restored example you find in the wild has major to complete rust in this area. To make things worse, the mufflers and the headers are one-piece, so there’s no “bolt-on” option for replacing them.

Since this was one of my favorite parts of the bike I spent a lot of time trying to replace/repair them while retaining the stock look, thinking I could find some on Ebay (I’ve had luck with so many other parts). As it turns out, since they all had this problem non-rusted out examples fetch a nice sum and more than I’m willing to invest (this isn’t a restoration project, I had to keep telling myself that). Finally a few months back I decided to damn the torpedoes and just slice off the mufflers and experiment. I figure the worst thing that can happen is I’ll need to pick up a replacement set, which is what I was looking at in the first place.

So I set out with Dremel in hand and attacked the pipes. This makes for great movie footage as sparks fly and smoke rises, but it doesn’t make for the cleanest cut possible. After seeing the results of this first attempt, I decided to give the hacksaw a try, which worked so well that I went back over the first pipe with the saw just to get a clean edge. 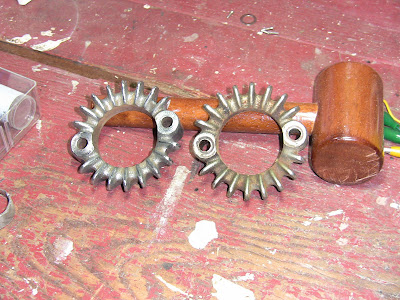 I had a little more time left and the pipes were so rusty that I decided to try taking a wire brush (attached to a power drill) to them and see if I could clean them up a bit. 30 minutes later they looked great (compared to before at least) and other than a few spots where the chrome had been removed (from a fall or something) they looked almost new. Well not new, but I think with some Brillo work they will look great. While I was at it I gave the clamps the wire wheel treatment as well and there was a huge difference (it didn’t come out so much in the photo but trust me, it’s very nice).

I spent a lot more time on this than I think I had to, but there was something so satisfying about making these parts look so nice. It makes me re-evaluate my approach to the bike, and now that I have a few months more to work on it’s I’m considering taking a more thorough approach to cleaning the rest of the machine up.